TL;DR: I was able to issue SSL certificates I was not supposed to be able to. AWS CloudFront and Heroku were among the affected. The issue was in the specification of ACME TLS-SNI-01 in combination with shared hosting providers. To be clear, Let’s Encrypt only followed the specification, they did nothing wrong here. Quite the opposite I would say.

(If you know how ACME and Let’s Encrypt works, you can skip to the next chapter.)

Let’s Encrypt started in November 2014 as an initiative created by the Internet Security Research Group (ISRG). The idea behind it was to create a certificate authority that provides free SSL certificates using an automated process.

This protocol utilizes three methods taken from the “10 blessed methods” in the Baselines Requirements [Section 3.2.2.4] created by a voluntary consortium of vendors and certificate authorities – the CA/Browser Forum.

The three methods utilized by the ACME specification and Let’s Encrypt are as follows:

There’s also a new version being tested, and was scheduled for later this year, called tls-sni-02. The difference between 01 and 02 is basically to make sure the random value in the certificate requested was not only just reflected in the response, something http-01 had already solved:

http://example.com/.well-known/acme-challenge/foo needs to show not only foo but foo.bar in the response.

The evening on Tuesday the 9th of January 2018, I had just put my daughter to bed and was looking at an interesting edge case with a web application.

The web app was a community that also allowed you to publish your own websites to it. They also supported HTTPS by uploading your private key and certificate to the app.

Now, if you’ve read this blog before, you know I have written and spoken about the non-existence of proper domain validation across the majority of cloud services.

This app was no exception.

The issue was just as with the other providers, you could add anyone else’s domain, and if that domain wasn’t already used by the owner of the domain, you could serve your content on it.

Now, to prove this was actually an issue I had to make a good proof-of-concept, something that I can show the company building the app so they understand why they should do this differently. So I started to look for domains that were pointing to the service, but without any page in the app that had claimed it. I started by looking at the subdomains of the company itself, since that makes it much clearer there’s actually an issue. In the example below the domain of the service will be called example.com.

What I found was a bit weird. The company had a page called investors.example.com. This page was using the service itself and was claimed properly. But, they also had a investor.example.com that redirected to the subdomain investors. It only redirected on port 80. Port 443 was serving the 404 page you would see on an unclaimed domain for their service.

I tried adding investor.example.com to my account, and it worked!

Congratulations! Your page is now served under investor.example.com.

I could now serve content on investor.example.com, but only on https, port 443. 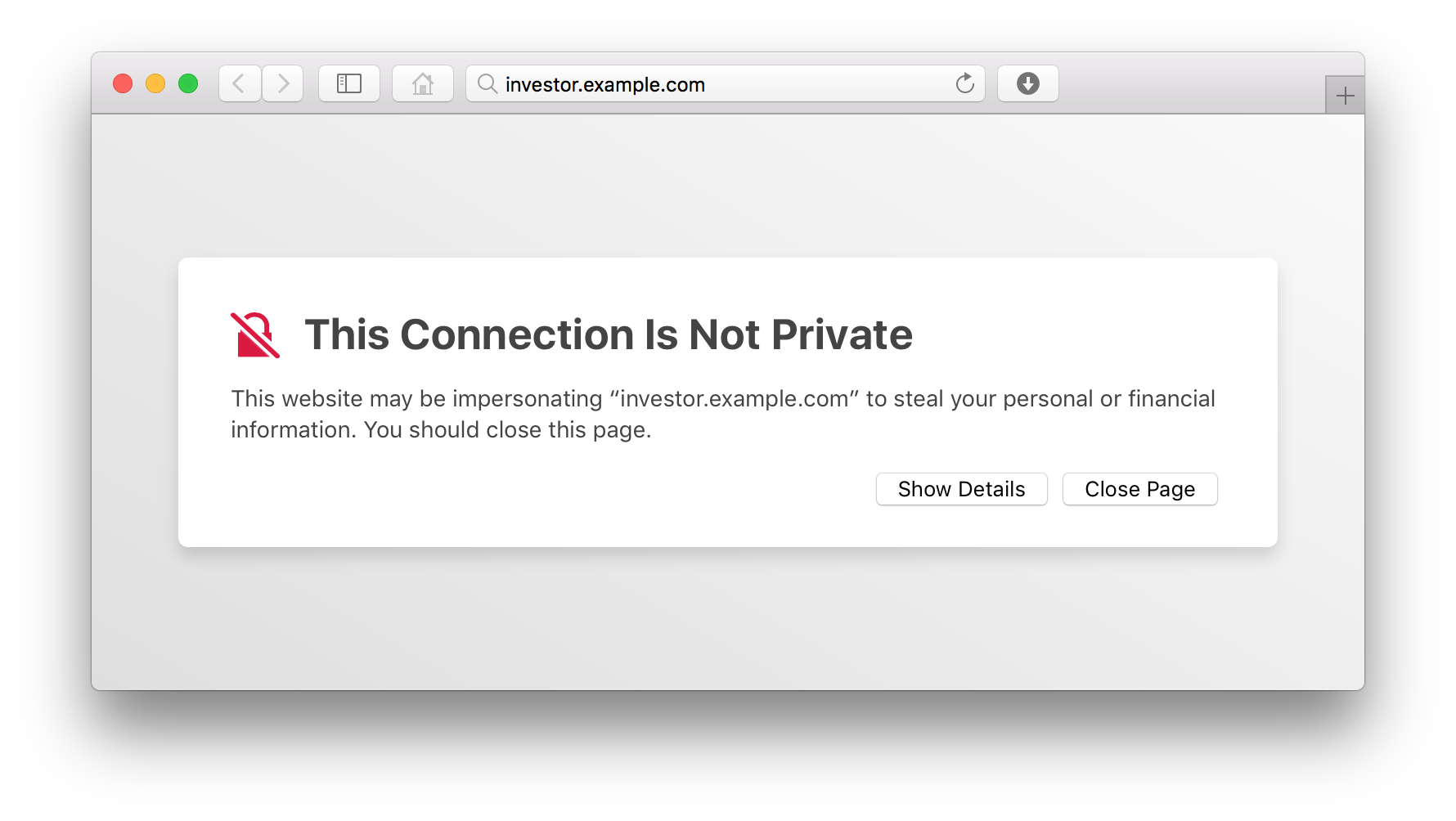 So to show them this was a bad thing, I had to prove I could actually get a certificate for this domain. If I could, it would then be possible to upload it to their page settings and serve the page with it. I didn’t need to upload the certificate if the validation went through, only show that I could actually validate the domain.

My first idea was just to host a file on /.well-known/acme-challenge/x depending on the challenge from LE using http-01. I used the acme_tiny project, made a small change to it so I could manually pause the check and just verify I could get the file on there:

I got a challenge back from Let’s Encrypt, uploaded it properly and tried.

It only tested on port 80, never on 443. I started reading up on http-01 and it turns out a fix was made that only made LE only connect to port 80 due to some shared hosting providers serving another domain on port 443.

There was one option however, if you wanted to use only port 443, called TLS-SNI-01. However, this challenge type wasn’t supported by acme_tiny. The way to do it was a bit different from uploading a file.

I looked for information about the way to verify, and found a really good post on it from the acme4j-project, they also had some code for showing the example. Here’s the code rewritten for brevity:

My jaw dropped. I was chatting with my friend Jobert when I read it, this was my reaction when I saw it:

The idea is basically this:

Since the start of the whole subdomain takeover stuff, I’ve seen many different ways to solve domain resolving. Some of the large providers, AWS CloudFront and Heroku, are doing it a bit similar to each other.

AWS CloudFront is a CDN network product from Amazon Web Services. CloudFront works like this: they put up a bunch of PoPs (points of presence). These are exit/entry nodes close to large cities, and depending on where you are it will route to entry nodes close to you. As soon as you have connected to their entry node, you enter their internal network.

Heroku is a cloud service where you’re able to create server instances, called dynos, which run in a large grid. There’s no real server, but your application shares a sandboxed infrastructure with others.

Both these services use their own centralized router. This router has a database of domains and decides what each domain requested should point to. This database handles conflict checking, so two customers cannot add the same domain.

They also allow you to add domains before you have connected to them. This makes sense if you want to prevent downtime moving to these services. You basically add the domain you like, and as soon as the DNS has pointed properly, the domain will not have any downtime in between.

Also, at least Heroku made a very interesting design choice. They separate the SNI request lookup from the Host-header lookup.

Since they only serve web applications, they can always rely on the Host-header to decide what to show. This means that the SNI being sent is only used to look up what certificate you should get.

This solution is convenient since it means you can create an app, add the wildcard domain *.example.net to it, upload your wildcard certificate connected to the app, and for every new app you create and add a subdomain of that domain to, you will be served with the wildcard certificate. The SNI lookup will serve the proper cert, and the Host-header will decide what app it will serve. This has also created some scenarios with “Subdomain Takeovers” where the takeover is actually serving the proper SSL certificate.

The lookups, however, are using the same centralized database, the one without any verification, remember?

It’s all downhill from here.

The first thing I did was to just add foo.bar.acme.invalid to a Heroku app.

It worked. I was stunned. I could not believe that I had read the specification correctly.

I did the same thing in AWS CloudFront. I then tried connecting to the CloudFront network using the acme.invalid-domain after the change had propagated:

I have a friend working in the security team for a large company, a company I should have no right to issue certificates for. I knew they used Heroku, and that they are always happy to help test out stuff for the greater good, so I pinged him and asked very kindly:

I suggested a few subdomains to test on, to make sure it was nothing critical: 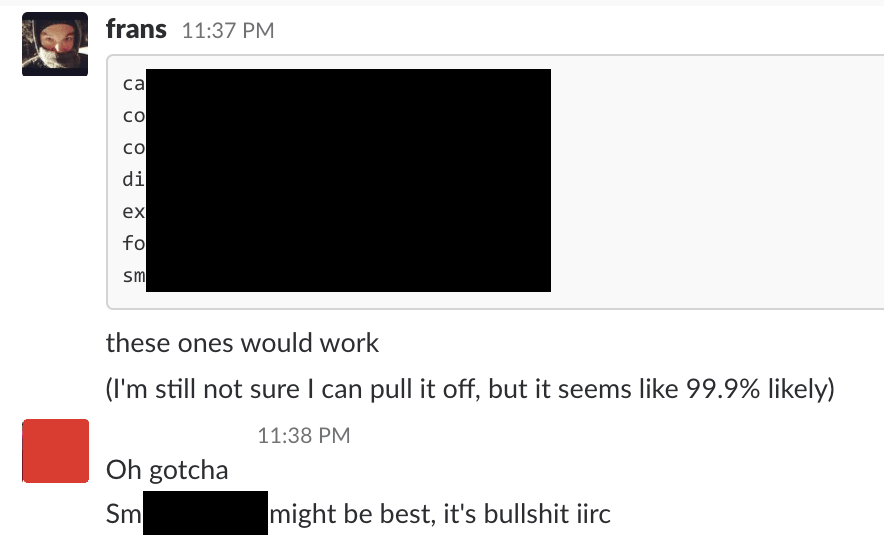 The domain was pointing to the Heroku routing network:

I started with the regular Let’s Encrypt setup for creating a new certificate. You create a Certificate Signing Request (CSR) from your private key with the domain as a SAN.

I then modified my acme_tiny.py to output the challenge for tls-sni-01 instead of the http-01 one:

And then I ran:

It gave me back the verification key and paused since I wanted to make sure I could continue when the setup was done. To know what domain you should put in the self-signed certificate, you had to encode the challenge properly (this was borrowed from the acme.sh project):

You then create your self-signed certificate with this domain inside the SAN, I still used the domain I wanted to verify inside the Common Name (CN=):

I now got the abc.xys.acme.invalid I had to add to my Heroku app, I also had my private key tls.key and the tls.pem with the self-signed certificate.

It uploaded successfully. It also asked me if I wanted to add sm.example.com to my app, since it found it in the CN. This was also a clear indication of their separation of lookups of SNI and Host-header still being connected to the same domain-lookup database. I answered no.

(Weird unrelated detail, it actually shows the value of the CN= in this view, even though that domain was used and not mine)

Now I waited. Sometime it takes time. Since I’m a dramatic person, I actually wrote a script, increased the volume of my computer, and made a loop that would look for acme.invalid in a proper SNI request. every 5 seconds. If it found it, it would repeatedly say "you broke the internet":

It took a minute or two. And then:

My acme_tiny.py still waited for me. I had permission from the company to try it. 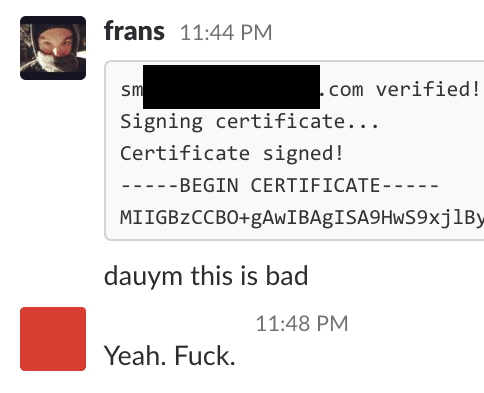 I verified on AWS CloudFront. Host had: 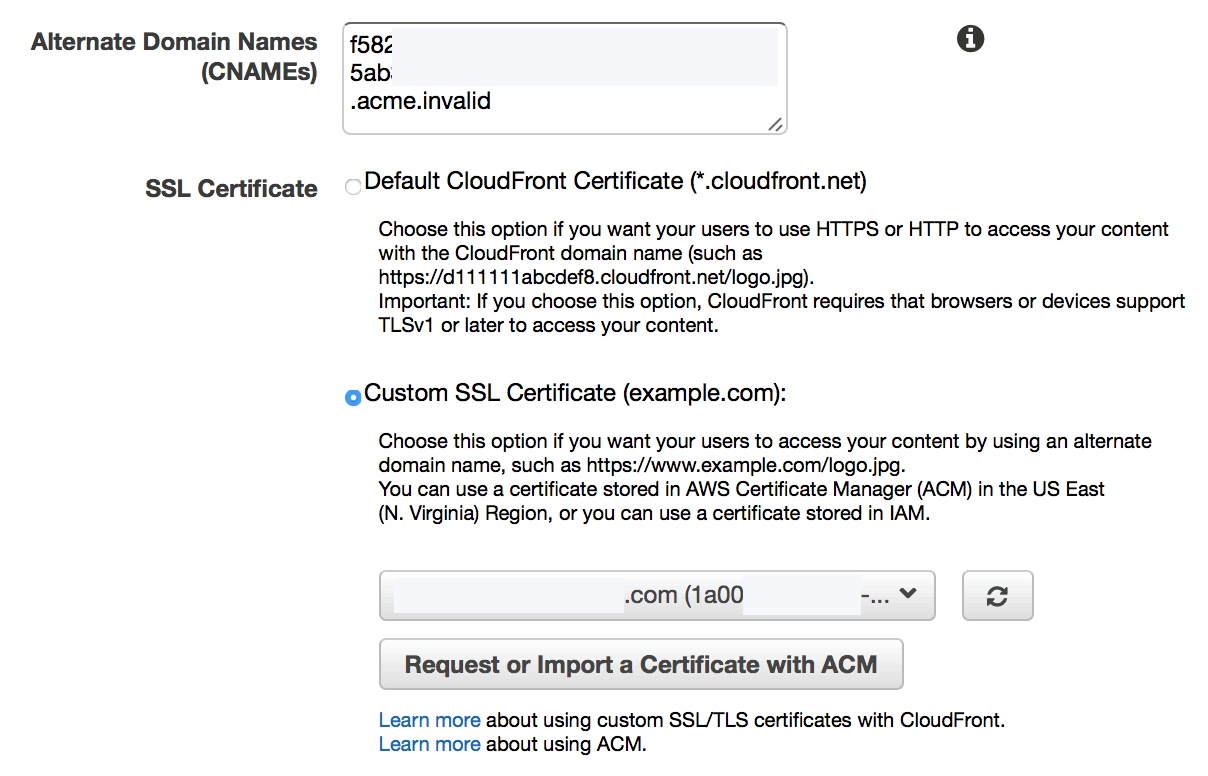 Reporting it to Let’s Encrypt

I now realized this was not a mistake by one cloud provider only. Two of the largest ones in the world are doing it wrong – this can not be a coincidence. And Let’s Encrypt only followed the ACME specification. The specification expected something with TLS-SNI-01 that didn’t apply to shared hosting infrastructure, not even the largest ones.

I found the Let’s Encrypt Security contact, and started writing my report. I sent an email directly giving them a heads up on a report incoming.

My email was sent to Let’s Encrypt at Wed, 10 Jan 2018 01:54:15 +0100 with all information about the current situation and that TLS-SNI-01 needs to be disabled, since it cannot be trusted as a proper verification method. I also told them I had issued two certificates with approval from the affected parties.

I had three mitigation suggestions:

Josh Aas replied to me in under 1,5 hour:

After that, it was just minutes until: 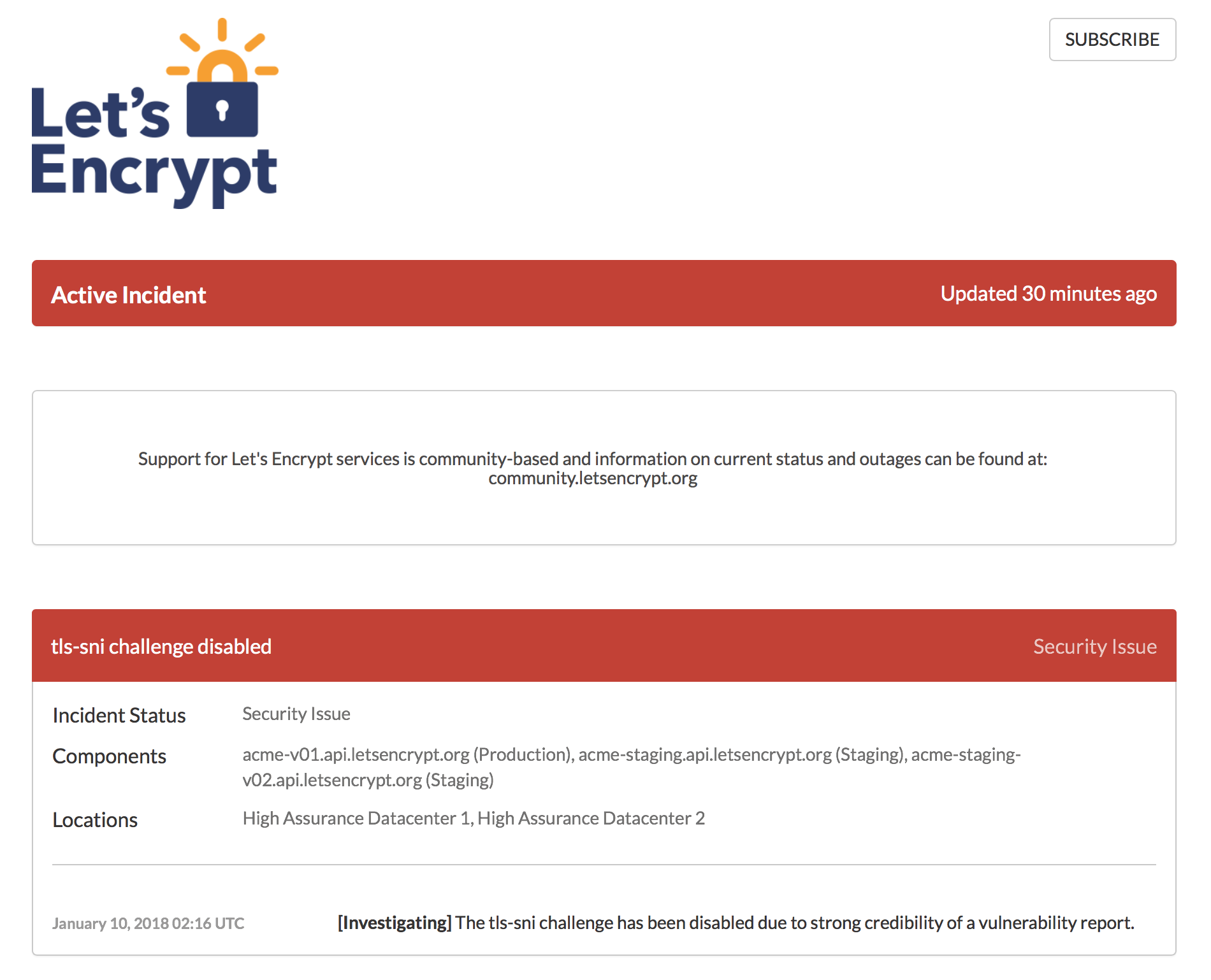 And only a few minutes later:

I went to bed, it was late, and this was not really what I had expected of this evening/night. I was really happy I found this. I woke up ~2 hours later with an email from Josh thanking me for the finding: 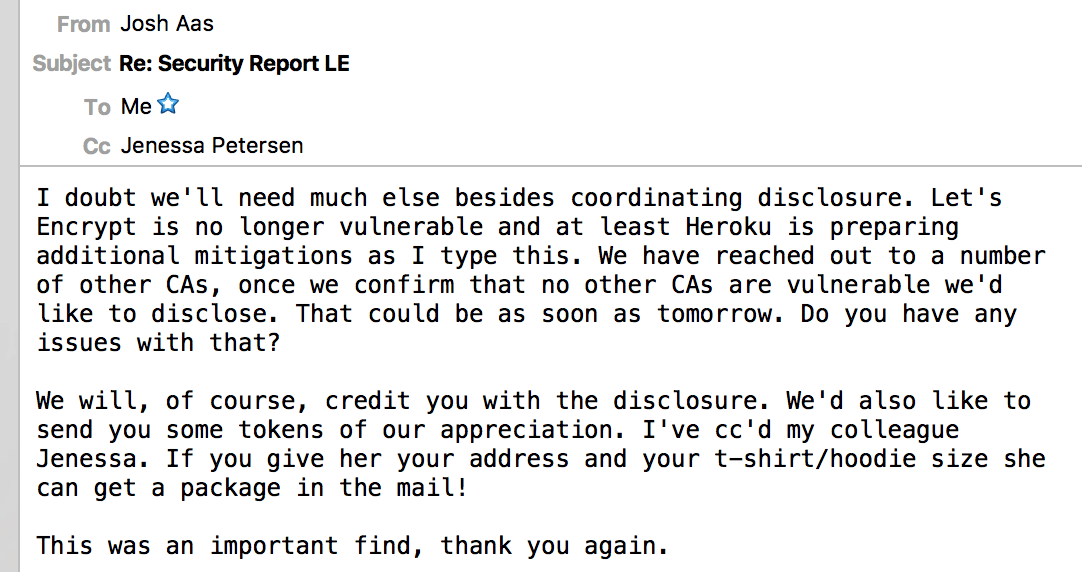 They later went out with the first announcement, crediting me for the finding. I sent a reply about how impressive their response and announcement was:

I’m really amazed by the speed with which Let’s Encrypt acted on this. As I mentioned, they never did anything wrong, they just followed a specification that was.

Today Let’s Encrypt announced the sunset of TLS-SNI-01 and TLS-SNI-02. Rest in peace.

PS. Oh, and I also reported the bug above for investor.example.com. (Yay)

PPS. I cross my fingers domain verification will be something that more cloud providers will consider after this.

PPPS. Heroku and AWS CloudFront have both made according to my second mitigation, they do not allow the .invalid TLD to be added to any instances or distributions any more.